How Many Characters Do You Need?

And I’m here to fess up.

An old writing rule of mine went, “Thou shalt not multiply characters beyond necessity.” Sort of a spin on Occam’s Razor, that kept me from packing my fiction with every character that popped into my head at the time.

Fewer characters means a tighter story, fewer distractions, a faster plot… and a lower word count. You can make that 8,000-word unpublishable beast into a lean 3,000-word speed demon that’s easier to sell.

Notice we’re talking about short stories here. In short stories, limiting the number of characters to the minimum that you dramatically require is a good rule.

So last month I’m reading the latest Steven Johnson, a random library pick called Everything Bad is Good for You

, and he’s talking about how drama (television, in this case) has grown in complexity over the past few decades. Modern TV drama, he argues, requires greater viewer memory and foreknowledge, has more parallel plotlines, more esoteric dialogue… and a lot more characters.

To help prove his point, he presents a “social network” of an episode of Dallas (1978-1991), a character map of everyone in the episode.

Then he presents the character map of an episode from the first season of 24 (2001). It’s quite a bit more complex, with more characters and more relationships.

Johnson’s argument that TV viewers have gotten used to, and enjoy, complicated dramas with a mess of characters, is only peripherally interesting to me as a novelist. Unless…

How have novels changed over time?

I was just wondering about that when I picked up a copy of Jane Austen’s Pride and Prejudice.

(Austen was a source of inspiration for Stephenie “Twilight” Meyer. Plus, Pride and Prejudice is wicked old, published in 1813, five years before Frankenstein. Generally I dig old fiction.)

I didn’t get very far in Pride and Prejudice. Sorry, fans. Austen broke a lot of rules of modern fiction. Good rules. Like, use speaker attributions in dialogue, so readers know who is speaking. And, don’t give characters similar-sounding names — Austen blesses us with five, that’s five sisters, all called “Miss Bennett” by other characters.

So rather than reading it, I started reading about it… and came across a character map (Johnson might say a “social network”) of it. 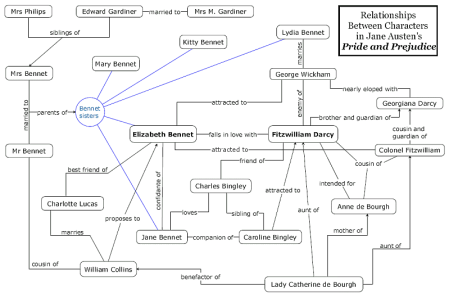 Holy crap, it’s a mess. No wonder I was confused.

It reminded me of Johnson’s map of the 24 episode.

Whatever the date, it’s clear that my old rule, “Thou shalt not multiply characters beyond necessity,” er, um… needs revision.

Still dandy for short stories. Not so useful for novels.

What, then? Pack your novels with characters?

, because I think he really nails this. He says that a writer can use other characters as a lens through which we see the main character. More characters in your story may, if done well, better illustrate a complex central character.

In essence, the protagonist creates the rest of the cast. All other characters are in a story first and foremost because of the relationship they strike to the protagonist and the way each helps to delineate the dimensions of the protagonist’s complex nature.

When McKee says complex, he’s talking about the Yin-Yang complexity of characters, the dual presence of opposite traits, that I’ve talked about in an earlier post.

Consider this hypothetical protagonist: He’s amusing and optimistic, then morose and cynical; he’s compassionate, then cruel; fearless, then fearful. This four-dimensional role needs a cast around him to delineate his contradictions, characters toward whom he can act and react in different ways at different times and places. These supporting characters must round him out so that his complexity is both consistent and credible.

Then McKee lets loose with a character map of his own. 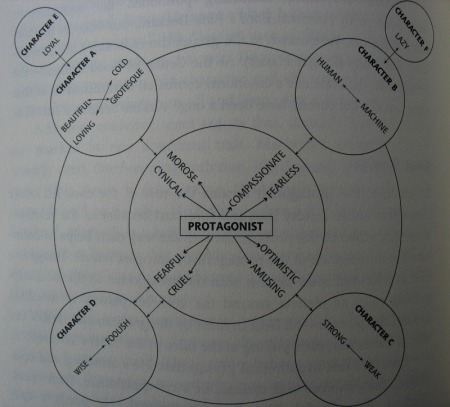 Character A, for example, provokes the protagonist’s sadness and cynicism, while Character B brings out his witty, hopeful side. Character C inspires his loving and courageous emotions, while Character D forces him to first cower in fear, then to strike out in fury. The creation and design of characters A, B, C, and D is dictated by the needs of the protagonist.

Wow. I’m not saying that Jane Austen and Joel Surnow included big casts of supporting characters in order to reveal the complexity of their main characters.

But forget them — I’m talking about me here. And you. No one is stopping us from doing it. Lesson learned.

This entry was posted on Sunday, August 30th, 2009 at 11:10 pm and is filed under Uncategorized. You can follow any responses to this entry through the RSS 2.0 feed. You can leave a response, or trackback from your own site.

9 Responses to How Many Characters Do You Need?